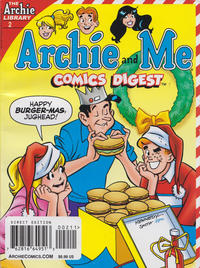 Genre
humor; teen
Characters
Archie Andrews; Jughead Jones; Hiram Lodge; Veronica Lodge; Hermione Lodge; Smithers
Synopsis
Archie and Jughead, dressed up as Santa and his reindeer, get a flat tire on the way to the Lodges' Christmas party. They stop to use the phone at an orphaned children's home and decide to celebrate there instead.
Reprints
Keywords
children; Christmas; flat tire; gift; present; reindeer; Santa Claus

Genre
teen
Characters
Archie Andrews; Fred Andrews; Mary Andrews; Betty Cooper; Veronica Lodge; Hiram Lodge; Hal Cooper
Synopsis
After falling on the ice, Archie is too sore to help his parents with the Christmas tree. But he can find the energy to help both Betty and Veronica with theirs.
Reprints
Keywords
Christmas; Christmas tree

Genre
humor; teen
Characters
Betty Cooper; Archie Andrews; Santa Claus [Barnaby Lumpkin]; kids
Synopsis
Betty has a job assisting a mall Santa Claus who has grown cynical. Christmas these days, he says, is all about money, and he does the job just for the money. When he loses his wallet, and two kids return it, he sees the error of his ways.
Reprints
Keywords
Christmas; holiday

A Class Act (Table of Contents: 7)

Genre
humor; teen
Characters
Reggie Mantle; Betty Cooper; Veronica Lodge
Synopsis
The girls are in a classroom with "art class" on the door and notice that Reggie has taken up painting. After Betty mentions this, Reggie says that if they can't say anything nice, then they shouldn't say anything at all. The girls are silent for the next two panels, and in the last panel, Reggie is begging them to say something.
Reprints

More Than Just a Box (Table of Contents: 11)

The Big Wheel (Table of Contents: 14)

Genre
humor; teen
Characters
Archie Andrews; Hiram Lodge
Synopsis
Archie is late for his date with Veronica, but not as late as she is.
Reprints

Two For Teenese (Table of Contents: 20)

This and "Too Much Love" are early examples of how stories in this title began shifting toward portraying a more romantic relationship between Archie and Betty, a response to readers who wanted to see her get Archie more often.

The Quiet Man (Table of Contents: 21)

Genre
humor; teen
Characters
Archie Andrews; Waldo Weatherbee; Geraldine Grundy
Synopsis
Archie is late for school. Mr. Weatherbee says nothing, but stands by and watches as Archie manages to hurt himself over and over again.
Reprints

Laugh! These Are the Jokes! (Table of Contents: 22)

Credits from the reprinting of this story in Archie & Friends Double Digest Magazine (Archie, 2011 series) #21, no credits printed in this digest.

Genre
teen
Characters
Mr. Weatherbee; Jughead Jones; Archie Andrews; Professor Flutesnoot; Reggie Mantle; Ethel Muggs
Synopsis
Someone has been stealing Jughead's snacks and he hopes the temporary tattoo of a third eye on his forehead will help him catch the thief.
Reprints

Branching Out (Table of Contents: 31)