Sandu, Master of the Supernatural (Table of Contents)

First Line of Dialogue or Text
Though I am far from Earth I, Loki, shall still defeat Thor with the help of... Sandu!
Genre
superhero; fantasy-supernatural
Characters
Thor [Doctor Donald Blake]; Loki; Sandu
Reprints 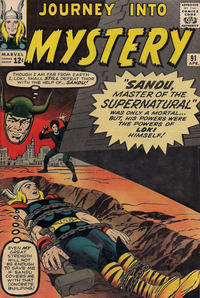 Sandu, Master of the Supernatural! (Table of Contents: 2)

Job Number
[X-111 ?]
First Line of Dialogue or Text
In his heavenly citadel, Odin, ruler of the Norse gods, thinks of his eldest son, the mighty Thor...
Genre
superhero; fantasy-supernatural
Characters
Thor [Donald Blake]; Jane Foster; Odin; Valkyries (introduction); Loki; Sandu (introduction)
Synopsis
Loki gives a greedy carnival mystic magical powers in order to use him to attack Thor. Thor is overcome in their first battle, but with the help of Odin and his belt of strength he defeats Loki's pawn.
Reprints
Keywords
Air Force; Police

The Party (Table of Contents: 3)

Job Number
[J-959]
First Line of Dialogue or Text
With a flower in his buttonhole, a broad smile on his face, and a handsome briefcase, Mr. Braggle left his car at the curb and approached the ivy-covered mansion.
Genre
humor
Characters
Mr. Braggle
Synopsis
A salesman trying to unload some oil stocks thinks that he’s found a rich mark, but instead walks into a party of talking dogs.
Reprints

The Seedlings (Table of Contents: 7)

Job Number
X-112
First Line of Dialogue or Text
We speak of missiles and bombs...
Genre
science fiction
Characters
Jeb Wilkens
Synopsis
Alien spores land on Earth and bloom into telepathic plants that would have conquered the world had they not been eaten by crows.
Reprints

The Manikins! (Table of Contents: 11)

Job Number
X-113
First Line of Dialogue or Text
You may wonder what a love story is doing in a fantasy magazine?
Genre
fantasy-supernatural
Characters
Selwin Simple
Synopsis
An odd man works with the manikins in a department store, but becomes upset when one of the female manikins is to be put in a bridal display. The employee disappears and the groom is replaced with a manikin that looks just like him.
Reprints

Narrated in the first person. Job number from Tom Lammers and Ger Apeldoorn via the Atlas/Timely discussion group.