The Human Torch vs. the Mighty Sub-Mariner (Table of Contents)

Pays tribute to the various Torch/Sub-Mariner battles of the early 1940's! 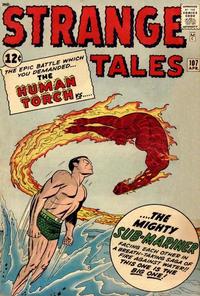 The Master of Flame vs. The Monarch of the Sea!! (Table of Contents: 1)

The Universal Gadget (Table of Contents: 2)

Job Number
H-254
Genre
fantasy-supernatural
Characters
Bill Jordan
Synopsis
A mysterious salesman offers a product that can do anything, but his customer decides that his ordinary contentment is better than the risk of the unknown.
Reprints

The first page of this story is printed between the pages of the Human Torch story, while the second page is printed between "Secret Weapon!" and "The Treasure of Planetoid 12!". The last page is split with the statement of ownership. Info by Barry Pearl.

Job Number
X-89
Genre
science fiction
Characters
Fedor Zelinki
Synopsis
A Soviet spy steals a gas intended to make the US leadership invulnerable, and uses it on the Soviet leaders. They find that it is a trap and the gas shrinks them to the size of insects.
Reprints

The Treasure of Planetoid 12! (Table of Contents: 5)

Job Number
[X-90 ?]
Genre
science fiction
Characters
Charlie Nast; Sam
Synopsis
In the year 2100 a criminal hijacks a spaceship to be the first man to claim the treasure of Planetoid 12. When he gets there, he finds nothing but water and mud. He thinks that it might be oil or something valuable, but after he drinks it he knows that it is merely water. The pilot that he forced along at gunpoint thinks he knows where the treasure is, but the criminal refuses to believe there is a treasure on Planetoid 12 at all until he reverts back into an infant. The pilot has realized the treasure is the fountain of youth.
Reprints