The Man with the Voice of Doom! (Table of Contents) 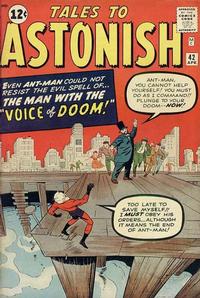 The Voice of Doom! (Table of Contents: 1)

Job Number
X-106
First Line of Dialogue or Text
I command you, Ant-Man!
Genre
superhero
Characters
Ant-Man [Henry Pym]; Voice [Jason Cragg] (introduction, origin)
Synopsis
A radio spokesman gains a hypnotic voice from radiation, and decides to test it by turning the people against Ant-Man. He captures Ant-Man and forces him to walk off a pier, but the ants rescue the hero, and he beats the Voice with laryngitis.
Reprints

Job Number
H-487
First Line of Dialogue or Text
"The effect of sound waves upon matter have always been a problem of interest to scientists, Mr. Bolton," Professor Carmichael told...
Genre
spy
Characters
Ezra Bolton; Prof. Carmichael; Prof. Greever
Synopsis
A bookkeeper dreams that he is a government agent hunting a mad scientist with a destructive sound device.
Reprints

The Eyes of the Mummy! (Table of Contents: 3)

Job Number
X-108
First Line of Dialogue or Text
What really is a human being??
Genre
science fiction
Characters
E-1
Synopsis
A humanoid robot escapes his creator's lab with an artificial face and clothes in order to live among humans as a man. He is so disillusioned with human beings inhumanity to their fellows that he removes the mask and allows his creator to bring him back to the lab. His maker says to him "You must have known you could never have passed for human for long." to which the robot replies to the startled engineer "Has the thought never occurred to you that no robot would want to?"
Reprints
Keywords
robot