Issue includes a free code that can be redeemed for a digital version of the issue.

Lobo and Black Canary Hunt the Worst Person in the Universe! (Table of Contents) 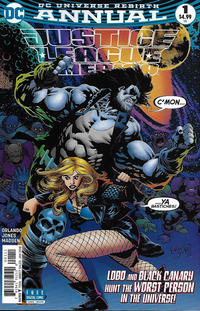 Batman reveals in a message to Lobo that events have drawn him away from the JLA. Presumably this story takes place prior to Justice League of America (DC, 2017 series) #18, where it is revealed that Batman has left the team.

Lobo reveals the pact that he had with Batman, in exchange for Lobo working with the JLA, Batman would help Lobo locate Del-Marzopa, home of the space dolphins. In the message that he left for Lobo, Batman gives Lobo the location of the planet, which he says Aquaman helped him locate. Presumably Aquaman's powers give him some ability to locate space dolphins.