This issue is a variant of Secret Origins (DC, 1986 series) #1 [Direct]. There exist further variants. 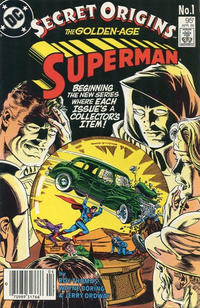 The Secret Origin of the Golden-Age Superman (Table of Contents: 1)

Retelling of the stories in Action Comics #1 and Superman #1.

Previously unpublished artwork. Wayne Boring provided information as to who did what.

Job Number
L-2263
Synopsis
Letters page explains why series was created post-Crisis. Roy Thomas goes into details how odd numbered issues would cover Golden Age origins, while the even numbered ones would follow the more silver/modern age origins. Gives brief history behind Golden Age Superman, and the writers and artists associated with him, including this issue's artist Wayne Boring.