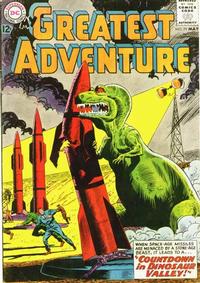 Countdown on Excellence (Table of Contents: 1)

Genre
advocacy
Synopsis
Jerry gets a lecture from his father on the importance of doing every job right.

Genre
science fiction
Synopsis
Scientists building a rocket base in the desert encounter a hidden colony of descendants from an expedition lost a century earlier.
Reprints

Strange Sports Stories Is the Most... (Table of Contents: 5) (Expand) /

The Adventurers' Club mailbox logo. Letters from Jess Brady, Marv Dalyrymple, Tom Baker, Barry Klein and listing of many names of fans who wrote to the magazine.

First Line of Dialogue or Text
This is the way to go exploring in the desert!
Genre
humor
Reprints

I Was a Prisoner of the Magic Mirror (Table of Contents: 12)

Genre
fantasy-supernatural
Synopsis
A detective searching for several missing men learns that they have been sent through a funhouse mirror to another dimension, where they are forced to mine valuable ore.
Reprints
Keywords
carnival

Now! In Their Own Spectacular Book! (Table of Contents: 14) (Expand) /

The Cowboys Had a Word for It! (Table of Contents: 15)