Held Captive...By the Old Gods and the New! (Table of Contents) 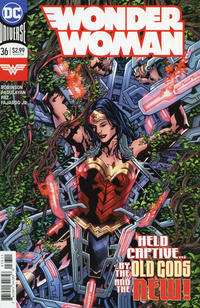 Children of the Gods Part 4 (Table of Contents: 1)

Genre
superhero
Characters
Wonder Woman [Diana of Themyscira]; Jason; Grail; Giganta [Doris Zeul]; Steve Trevor; Amanda Waller; Darkseid; Blake Hooper [Zeus]
Synopsis
Diana has been betrayed by Jason, who is working with Grail to capture Diana so that Darkseid can use her life force to restore himself to full power.
Reprints