Possible Kirby cover inks per Nick Caputo who did a study of Kirby inking on his blog:. 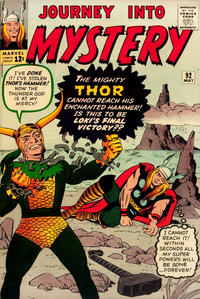 First Line of Dialogue or Text
Without his magic hammer, mighty Thor is as bereft of power as mighty Samson without his hair!
Genre
superhero; fantasy-supernatural
Characters
Jane Foster; Frigga (cameo) (called "Fricka", introduction); Heimdall; Loki; Odin; Thor [Doctor Donald Blake]; Mr. Jones; Neri (Handmaiden, introduction, cameo)
Synopsis
Loki magically diverts Thor's hammer to free himself from his chains. Thor returns to Asgard to find the hammer, and Loki tries to kill him with magical traps, but Thor overcomes them all to find his hammer and catch Loki.
Reprints

The Remedy Oil (Table of Contents: 3)

Job Number
[J-984]
First Line of Dialogue or Text
All of the fancy clothing stores on Main Street were doing a booming business at Easter time except old Mrs. Gerrity's.
Genre
science fiction
Characters
Mrs. Gerrity; Tom Gerrity; Officer O'Malley; Logarithm
Synopsis
An old-fashioned shopkeeper unwittingly saves the life of a boy from Mechanica when her remedy oil lubricates the gears in his brain.
Reprints

The Man Who Hated Monstro! (Table of Contents: 7)

First Line of Dialogue or Text
You're huge and powerful, but somehow--someway--I shall destroy you!
Genre
animal; horror-suspense
Characters
Karl Krumm; Monstro
Synopsis
A star acrobat is jealous of a popular gorilla at his circus and torments it. Finally, he arranges for the gorilla to break free so that it will be shot, but it has enough strength left to swing out on the trapeze to get revenge.
Reprints

First Line of Dialogue or Text
Yes, once I too was human -- just as you are!
Genre
science fiction
Synopsis
A space pilot is stranded on a planet where the only available food turns the eater into one of the planet's hideous natives. He eats the fruit in order to survive, but finds that the psychic communications of the creatures are so beautiful that he doesn't want to change back.
Reprints
Keywords
Rrorgo