The Painter of a Thousand Perils (Table of Contents) 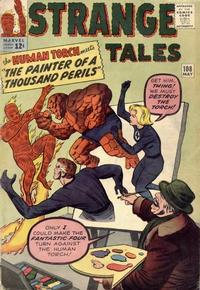 The Painter of a Thousand Perils! (Table of Contents: 1)

Kirby draws one of the henchmen in the Iron Man story in this month's Tales of Suspense (Marvel, 1959 series) #41 (May 1963) with the same face as Scar Tobin.

Text story with illustration. Heck credit from the entry for Journey Into Mystery #44.

The Silent Giant (Table of Contents: 3)

Job Number
X-146
Genre
fantasy-supernatural
Characters
Ben
Synopsis
An old hermit becomes enraged that the nearby redwood tree will outlive him, but when he dies the tree transforms its friend into an immortal redwood too.
Reprints

The Iron Warrior (Table of Contents: 4)

Job Number
X-147
Genre
sword and sorcery
Characters
Merlin; King Arthur; Black Knight (animated suit of armor); Sir Mogard
Synopsis
A knight of King Arthur's court resents the favor shown Merlin and so challenges him to a battle. Merlin's champion, a black knight, wins the competition. The envious knight still sneers at Merlin and claims he has no true magic powers, but Merlin makes a mystic pass and the empty suit of armor falls in pieces upon the ground.
Reprints