The Mad Master of Time! (Table of Contents) 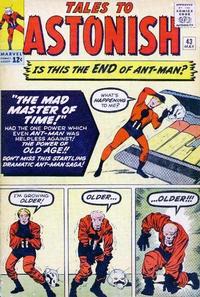 The Mad Master of Time! (Table of Contents: 1)

Job Number
X-125
First Line of Dialogue or Text
Thousands of footsteps tread daily upon the sidewalks of Center City...
Genre
superhero
Characters
Ant-Man [Henry Pym]; Time-Master [Elias Weems] (introduction, origin); Tommy Weems
Synopsis
A scientist forced to retire makes a device to artificially age others and holds the city hostage. Ant-Man can't stop him, but when he accidentally ages his own grandson he repents and reverses the damage.
Reprints
Keywords
Center City

Job Number
[G-377]
First Line of Dialogue or Text
Lester counted up all his cards and gave the number to the scorekeeper.
Genre
fantasy-supernatural
Characters
Lester Ford; Marie Ford; Lady Luck
Synopsis
A businessman doesn’t believe in luck, but several beneficial encounters with an old lady change his mind.
Reprints

First Line of Dialogue or Text
Frankie Jones could throw the fastest ball in the world!
Genre
science fiction
Characters
Frankie Jones; Mr. Jones; Mrs. Jones
Synopsis
A boy gains extraordinary physical and mental abilities due to his parents' exposure to radiation. He wants to play baseball, but his fastball punches a hole in a tree and would damage a catcher.
Reprints

This is a retelling of "The Rookie" from Marvel Tales (Marvel, 1949 series) #131 (February 1955). The idea of radiation granting super-powers to unborn children was a major part of early X-Men stories.

My Fatal Mistake! (Table of Contents: 4)

Job Number
V-818
First Line of Dialogue or Text
I am the only human on Earth ever to defeat the mighty Cosmo...
Genre
science fiction
Characters
Yates; Cosmo
Synopsis
A man is bitter because he has been replaced by a computer and must take a job servicing it. It is ensconced in an air-tight clean room with a door that is opened after fifteen minutes allotted for servicing purposes. When the man enters the room, he gets the idea to sabotage the machine so that it will make mistakes and he can get his old job back, but he damages the circuits that allow the machine to open the door after the fifteen minutes of oxygen are used up.
Reprints

Per Cory Sedlmeier on the Marvel Masterworks Message Board, "TTA #43's 'My Fatal Mistake!' doesn't have a job number listed, but a little research makes me feel comfortable saying that it was probably V-818."