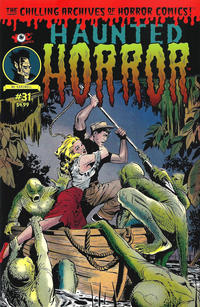 The Death Head! (Table of Contents: 2)

The Web of the Spider (Table of Contents: 3)

Genre
horror-suspense
Characters
Martha Durando (Hugo's wife, mentioned only, death); Professor's unnamed assistant (death?); Professor Hugo Durando (villain, death)
Synopsis
When learned experts refuse to listen to Professor Durando's wild claims, he decides to go out on his own and conduct experiments with his serum that can change a men to beast and back again... on himself, with horrifying and unexpected results!
Reprints
Keywords
Daily Express; spider; spider web

Genre
horror-suspense
Synopsis
Two friends fall in love with a mysterious woman they meet at a museum. After buying mini souvenir nooses made from the rope of a noose used to hang a witch 300 years ago, the nooses strangely begin to grow...
Reprints

The Cat Jumped over the Corpse (Table of Contents: 5)

Genre
horror-suspense
Characters
John Hale; Maria Hale; Rowan; Granny; Katie
Synopsis
Katie lusts for John Hale, but is killed in a botched attempt to murder his wife Maria. After a black cat leaps over her corpse, Katie is revived as a vampire.
Reprints

The Thing from the Dark (Table of Contents: 6)

Job Number
B-1726
Genre
horror-suspense
Synopsis
On an expedition in Peru, Larry Graham is caught in a cave-in caused by his rival. He survives underground, but turns into a monster mole yearning for human blood. Larry goes on a killing spree, finally getting his claws on the man responsible for his situation.
Reprints

Valley of the Scaly Monsters (Table of Contents: 7)

Genre
horror-suspense
Synopsis
In the steaming Amazon jungle, "Creature from the Black Lagoon"-like creatures kidnap a woman from an expedition. They drug her and want to make her the queen of the lizard people. Her boyfriend intervenes and buries the creatures under an avalanche of rocks.
(the movie came out three years later, by the way...)
Reprints

Jim Vadeboncoeur was the original expert who determined that this art was not by Matt Baker, but as the name of this artist wasn't known, he referred to him as "Ace Baker", as he drew exclusively for ACE. Frank Giusto was discovered and interviewed for the 2012 book, Matt Baker: the Art of Glamour.

Genre
horror-suspense
Synopsis
Two brothers fall in love with a mysterious woman they meet at a funeral. She leads them to a curio shop where they buy miniature coffins. Strangely, though, the wooden boxes begin to grow.
Reprints

Palette Art is listed as an art studio.