Threat of the Faceless Creature (Table of Contents) 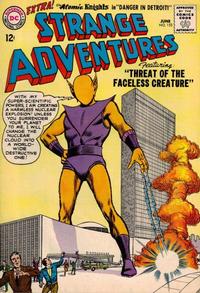 Genre
advocacy
Synopsis
Alvin thinks about leaving school until he talks to his dropout friend George, who has to go back to night school because he can't get a good job.

Threat of the Faceless Creature (Table of Contents: 2)

Third appearance of the Faceless Creature (previously in #124 and #142), who later becomes a member of the Forgotten Villains in the 1980s. Sid Greene's usual depiction of Julius Schwartz as a character occurs in page 6 panel 3 (bespectacled bystander).

Murphy Anderson's hidden signature [as MA] located on page one, in foreground.

First Line of Dialogue or Text
By the time the average human being reaches the age of 75, his backbone...
Genre
non-fiction; math & science