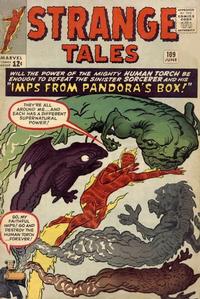 The Sorcerer and Pandora's Box (Table of Contents: 1)

The Sorcerer and his mansion in the country appears to be a tribute to Dr. Julian Karswell (Niall MacGinnis) from the film Night of the Demon (1957). A woman who used "Pandora's Box" to commit crimes turned up in the 1967 Spider-Man cartoon, "Here Comes Trubble".

The Comic (Table of Contents: 2)

Earth Is Off-Limits! (Table of Contents: 3)

Job Number
X-185
Genre
science fiction
Synopsis
Space explorers discover life on a far off planet, but mission control panics at the thought of alien germs loose on Earth and so forbids them to return. The crew asks for chance to explain, but mission control breaks the communication as they cannot bear to listen to their pleas. What the space explorers were trying to say before their communication line was broken was that the life on the planet grants disease immunity and long life span.
Reprints

Job Number
X-184
Genre
science fiction
Characters
Eric Kane
Synopsis
A scientist builds a time machine and travels to prehistoric times. When he kills an attacking caveman he unknowingly kills his own human ancestor, meaning that he becomes a neanderthal.
Reprints