The Creature From Kosmos!! (Table of Contents) 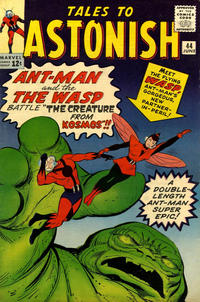 The Creature from Kosmos! (Table of Contents: 1)

Job Number
X-192
First Line of Dialogue or Text
Throughout history there have been men who have become legends, men who have...
Genre
superhero
Characters
Ant-Man [Henry Pym] (origin detail); Wasp [Janet Van Dyne] (introduction, origin); Creature from Kosmos [Pilai] (introduction, named in a later comic); Maria Trovaya-Pym (flashback, introduction); Vernon Van Dyne (introduction); Lee Kearns (voice only)
Synopsis
When a fellow scientist is killed by an alien being, Ant-Man enlists the help of the dead man's daughter. He gives her the ability to shrink and tiny wasp wings, and she joins him as his partner the Wasp. The duo use the alien's acidic nature to destroy it, saving the city.
Reprints

In addition to introducing the Wasp, this story fleshes out Henry Pym's background and introduces the death of his wife as a motivating factor.

Blueprint for Victory (Table of Contents: 2)

First Line of Dialogue or Text
The odds were impossible?
Genre
science fiction
Synopsis
In the year 2000 all of New York City is searching for a 'plague carrier' who is attempting to escape notice and flee the city. He is apprehended at a transportation center and the police remove the 'plague' from him which turns out to be a handgun he had stolen from a museum which officials had worried could back bring the plague of war.
Reprints
Keywords
New York