Art credits from Nick Caputo via the GCD Error List (8 April 2006); the original indexer credited Marie Severin with the pencils and Frank Giacoia with the inks. 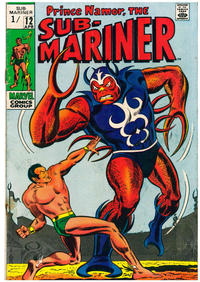 A World Against Me! (Table of Contents: 2)

Previous indexer listed Dan Adkins and/or Joe Sinnott as possiblly assisting on the inking on a few pages, but Nick Caputo sees no evidence of other inkers besides Marie in the story.