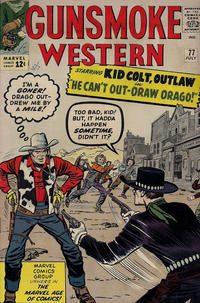 Nick Caputo doubts the inking is the work of Jose Delbo. His Biblio on his website lists no credits for Atlas and his earliest stateside work is all for Dell.

The Tenderfoot (Table of Contents: 2)

Guns Bark in the Badlands (Table of Contents: 3)

Genre
western-frontier
Characters
Hank Porter; Clem; Mr. Carter
Synopsis
Hank ferries his passengers through the Badlands and fights off hijackers. When they arrive in Cheyenne, Mr. Carter claims all the credit for Hank's heroics.
Keywords
Cheyenne

Job Number
X-314
Genre
western-frontier
Characters
Joel Cravel
Synopsis
Joel trains hard to be a fast draw but he becomes such a dangerous gunfighter that everyone is afraid of him.

They Call Him Dude (Table of Contents: 5)

Genre
western-frontier
Characters
The Dude; Dusty; The Clagton Brothers
Synopsis
Because of his reputation people challenge the Dude to gunfights, but his sloppy sidekick Dusty is the actual quick-draw who does all the fighting.

Retold from "The Dude" from Gunsmoke Western #34.