Distributed to newstands in May 1963. This issue includes 10 pages of paid advertisements.

First Line of Dialogue or Text
Any man who lifts his hand against Loki, will have to battle Thor as well!!!
Genre
superhero
Characters
Thor [Doctor Donald Blake]; Loki
Reprints 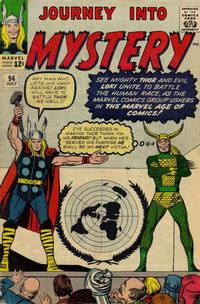 Job Number
[K-424]
First Line of Dialogue or Text
All the kids on the block were getting parakeets.
Genre
fantasy-supernatural
Characters
Tony Tipple; Skeets Mulligan; Toodles Murphy
Synopsis
A meeting with a strange man gives a boy an unusual way of getting a pet bird, talking to birds.
Reprints

Text story with illustration. Story title is from The Mighty Thor Comics Index #5 by George Olshevsky.

First Line of Dialogue or Text
He thought the grass was greener on the other guys' planet!
Genre
science fiction
Characters
Laird Benedict
Synopsis
In the future, Earth is overpopulated, and even the very rich must work an hour on a farm each week to produce enough food. A rich man leaves Earth and finds a sparsely-populated and fertile planet to live on. He discovers that the plants are actually predatory, and that the few peaceful inhabitants are so short of food that he must work eight hours a day to feed himself.
Reprints
Keywords
Deimos; space travel

Job Number
X-308
First Line of Dialogue or Text
He was the sort of tenant that a landlord like "Greedy" Grundy dreamed about!
Genre
science fiction
Characters
Gregory "Greedy" Grundy
Synopsis
A greedy landlord is captured by a time traveler who maintains a collection of 'dolls' consisting of miniaturized heartless people from different eras.
Reprints
Keywords
time travel