The Wizard and Paste-Pot Pete (Table of Contents) 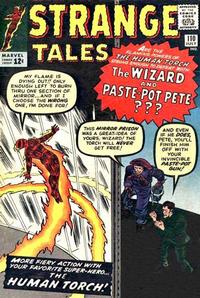 The Human Torch vs. the Wizard and Paste-Pot Pete! (Table of Contents: 1)

More humor than usual in this issue. First time these two villains teamed up in what would become pretty much a lifelong partnership!

We Search the Stars! (Table of Contents: 3)

Job Number
X-220
Genre
science fiction
Characters
Sir Edward Ramsay
Synopsis
A space expedition discovers what they believe is a savage human-like species and flee, not suspecting that they are an advanced psychic race able to meet all their needs through thought.
Reprints

This is the first Doctor Strange story. It's clear there's a lot of history between Strange and Nightmare. Doctor Strange resembles Vincent Price, who played a magician in the Roger Corman-Edgar Allan Poe film, The Raven (1963).