The Return of Egghead! (Table of Contents) 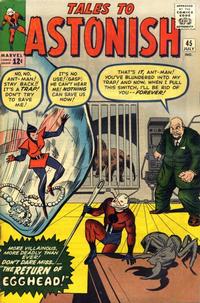 The Terrible Traps of Egghead! (Table of Contents: 1)

The Future (Table of Contents: 2)

Job Number
X-215
First Line of Dialogue or Text
Talk about brains!
Genre
science fiction
Characters
Bruno Bronson (called Boris in one panel)
Synopsis
Bronson, an incredible genius upset that no one on earth can match his tremendous intellect, builds a space ship and travels to a planet of highly advanced aliens. After the aliens test Bronson, they determine that his intelligence is so low compared to their species, that the earthling must be imprisoned for his own safety.
Reprints
Keywords
mento-meter

Job Number
X-214
First Line of Dialogue or Text
The time is Christmas, 1973!
Genre
science fiction
Characters
Ben Trent; Ronnie Trent; Helen Trent; Carlo
Synopsis
A man is disturbed by his daughter's attachment to her new robot playmate, but changes his mind when it saves her life.
Reprints
Keywords
robots