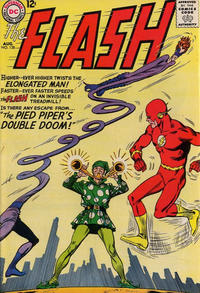 Genre
superhero
Characters
Flash [Barry Allen]; Elongated Man [Ralph Dibny]; Tower City police officers; Sue Dibny; Iris West; Pied Piper [Hartley Rathaway] (villain)
Synopsis
The Pied Piper uses his musical control to force both The Flash and The Elongated Man to commit robberies and forget they did so, but the heroes meet while trying to solve each others' crimes and realize the Pied Piper is behind the scheme, and defeat him.
Reprints

Refers to Flash #106 and #113. Flash is able to temporarily stretch using one drink of Gingold. DC Special Series reprint credits the script to John Broome.

How Not to Enjoy a Vacation! (Table of Contents: 5)

On the page immediately preceding page 7 of the previous story sequence. Credits from a list by Lionel English.

Letter from Jerry Bails regarding the relative merits of the current Flash stories vs. the stories from the 1940's. For his comments, Jerry is awarded the original artwork for Part 1 of "Secret of The Three Super-Weapons." Also includes letters from Paul Moslander, Ronald E. Haerle, and Richard West.

Mystery of the Matinee Idol! (Table of Contents: 10)

A new feature of Kid Flash's new costume appears for the first time; the hair spray used to change his hair from red to brown when appearing as Kid Flash. Intro Dexter Myles, who later becomes curator of the Flash Museum.

Fight Global Air Battles with Planes of All Nations (Table of Contents: 13) (Expand) /