Distributed to newstands in June 1963. This issue includes 10 pages of paid advertisements. 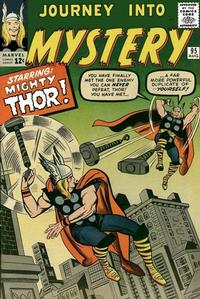 The Demon Duplicators! (Table of Contents: 1)

Job Number
[G-85]
First Line of Dialogue or Text
I think the first time I really began to think seriously about the mysteries of Time was when I was about fourteen years old.
Genre
science fiction
Synopsis
A man's fascination with history leads him to build a time machine and travel to the past, but when he sees the dangers of time travel he destroys the machine and blueprints.
Reprints

Text story with illustration. Narrated in the first person. Story title is from The Mighty Thor Comics Index #5 by George Olshevsky.

The Tomb of Tut-Amm-Tut! (Table of Contents: 3)

Job Number
X-331
First Line of Dialogue or Text
Some people will wait a long, long time to get revenge!
Genre
fantasy-supernatural
Characters
Tut-Amm-Tut; Ammen
Synopsis
An evil pharaoh has himself placed in stasis for centuries to escape his rival, only to find that his rival went into stasis in order to meet him when he awakes.
Reprints
Keywords
Egypt

Save Me From the Lizard Men! (Table of Contents: 4)

Job Number
X-330
First Line of Dialogue or Text
Like space yarns? Okay!
Genre
science fiction
Synopsis
A human crashlands on an alien planet, and the inhabitants believe that he is a spy from the shape-shifting people of a nearby world. He alerts an Earth ship to rescue him, but he steals one of their life pods and escapes without thanking them, since he really was a shape-shifting alien.
Reprints

Narrated in the first person. Job number from Tom Lammers and Ger Apeldoorn via the Atlas/Timely discussion group.