How Can the Human Torch Defend Himself against the Attacks of the Asbestos Man? (Table of Contents) 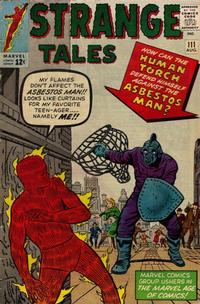 Fighting to the Death with the Asbestos Man! (Table of Contents: 1)

Letterer identified as Sam Rosen under a pseudonym by Jerry Bails.

Job Number
G-750
Genre
fantasy-supernatural
Characters
Tommy; Kitty Blake; Old King Cole
Synopsis
A man with no imagination is invited to a costume party by his girlfriend, but stumbles across real fairy-tale folk instead.
Reprints

Job Number
X-310
Genre
science fiction
Characters
X-200; Jocko
Synopsis
A super-intelligent computer is built by American scientists and attempts to conquer the world. It defends itself against humans, but an organ-grinder's monkey goes un-noticed and unplugs the machine.
Reprints

Face-to-Face with the Magic of Baron Mordo! (Table of Contents: 4)

Job Number
[X-311 ?]
Genre
superhero; fantasy-supernatural
Characters
Doctor Strange [Stephen Strange]; Baron Mordo [Karl Amadeus Mordo] (introduction) ; Hamir (introduction, unnamed); Ancient One [Yao] (called "the Master")
Synopsis
In his castle in Europe, Baron Mordo plots to steal the secrets of his former master, The Ancient One. Sending his spirit form to Tibet, he causes Hamir to poison The Ancient One's food. From his NYC sanctum, Strange senses his master's plight, and challenges Mordo to a battle in their spirit forms. After, The Ancient One warns Strange that Mordo will be a danger to them both, as long as he lives.
Reprints