Includes 10 pages of paid advertisements. On-sale date is the publication date reported in U. S. Copyright Office filings.
This issue has variants:

The Mad Pharoah! (Table of Contents)

The unaltered version of this cover was used on Creepy Worlds #68.

Pharaoh misspelled as "pharoah" on the cover (and throughout the story). 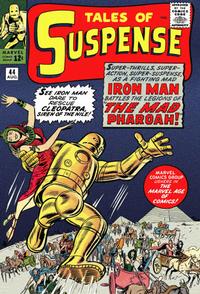 The Mad Pharoah! (Table of Contents: 1)

Pharaoh misspelled as "pharoah" throughout the story (and on the cover).

The Tree (Table of Contents: 2)

Job Number
K-435
First Line of Dialogue or Text
Living far out in the country was going to be a lot of fun, young Wally decided.
Genre
fantasy-supernatural
Characters
Wally Hadley; Mr. Hadley; Mrs. Hadley
Synopsis
When a family moves to a house in the country their son finds a gnarled little tree on their land that grants wishes.
Reprints

Job Number
X-312
First Line of Dialogue or Text
I've had to make lots of tough decisions since I became a space jockey, but the...
Genre
science fiction
Characters
Darius Wentworth
Synopsis
When a space passenger yacht is damaged, one of the passengers must be sacrificed for the others to survive. The captain lies in order to discover which is the most selfish and trick that person into making the sacrifice.
Reprints

Perhaps with an oxygen shortage the captain shouldn't be smoking a pipe.

Job Number
X-313
First Line of Dialogue or Text
This is the startling tale of a man who almost became a god!
Genre
horror-suspense
Characters
Serge Plotski
Synopsis
A communist agent in Africa is supplying guns and explosives to tribesmen to encourage uprisings. When flying his plane to another group, he gets struck by lightning and ditches his plane near an unknown tribe. These natives are like the ones in King Kong who have built a huge wall to keep out some horrible beast. The agent uses his lighter and last bullet to convince them he is a sky-god, but they deposit him outside the wall, alone and unarmed, with instructions to use his divine powers to defeat their huge beast.
Reprints