The Interplanetary Olympics! (Table of Contents) 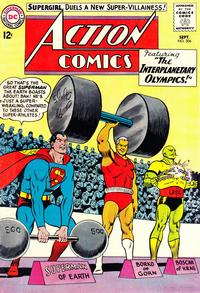 The Interplanetary Olympics! (Table of Contents: 2)

Genre
superhero
Characters
Superman [Clark Kent]; Lana Lang; Lois Lane; Rogan of Vorn; Borko of Gorn; Boscar of Krag
Synopsis
Superman and Lana are taken to the planet Vorn, where Superman is invited to compete in the Interplanetary Olympics. He loses in all the competitions, and later reveals to Lana that he knew it was all a plot to steal his super-powers, which is why he didn't use them.
Reprints