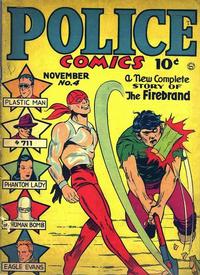 First Line of Dialogue or Text
Stark dangers beyond the realm of Rod Reilly's everyday life...
Genre
superhero
Characters
Firebrand [Rod Reilly]; the Nazis (villains)
Synopsis
Rod develops a combat bomber capable of taking off and landing with only 50 yards of airstrip available. After the Nazis attempt to steal the plane and the Firebrand steps in to stop that endeavor, the U.S. military orders 5000 of the aircraft.

Van Dern is the name of Batman's maternal family and the pearls are a symbol linked to his mother's death in more modern revelations.

The Yegg Beater (Table of Contents: 3)

[Defending the Dartmoor] (Table of Contents: 4)

Story riffs on Universal's Frankenstein movies, with Dr. Scratch in search of a brain, aided by his assistant Gargoyle (think Igor), with his intended target being Dr. Nienstine (rhymes with Frankenstein).

Belfi claimed (in Alter Ego #11, page 6) to be inking some Plastic Man stories at this date. The art does look rather different from Cole's complete pencil and ink jobs, so this may feature at least partial Belfi inks.

First Line of Dialogue or Text
But Dewey -- what makes you think you'll do well in the tank corps?
Genre
humor
Characters
Dewey Drip

[The Dirigible of Doom] (Table of Contents: 11)

First Line of Dialogue or Text
At the laboratory in Washington...
Genre
superhero
Characters
The Human Bomb [Roy Lincoln]; the Nazis (villains, some die)
Synopsis
Roy, an accomplished chemist in his own right, invents another explosive that scares his co-workers so much that he moves the experiment into his own private lab. It is formulated into a substance that is harmless on its own, but detonates when it comes in contact with Roy's hot hands. The substance is used to take down a Nazi vessel that the Human Bomb encounters en route to Havana.

Art credits revised from Gustafson to Eisner-Fine by Craig Delich (per note below):

"Upon examination of the original artwork to “Police Comics #4, page 62”, featuring The Human Bomb in the story: “The U-Boat Battle,” it indicates that this specific page, and likely the entire story, was illustrated by the combined talents of Will Eisner and Louis K. Fine and NOT by Paul Gustavson as originally credited to, although Paul Gustavson DID in fact write this particular story. Will Eisner's long-time publisher and art agent, Denis Kitchen, confirmed that “panel 1” from “Police Comics #4, page 62” looks incredibly like Will Eisner’s late 1930’S style of work as seen in the Quality Comics’ “Smash Comics” titles: “Espionage: Starring Black X” series, while the remaining panels featuring The Human Bomb in the heat of battle, resemble the style Lou Fine with the finely delineated line work, the broken-panel layouts, and the overall positioning of The Human Bomb."