Distributed to newstands in July 1963. This issue includes 10 pages of paid advertisements.

Merlin the Mad! (Table of Contents) 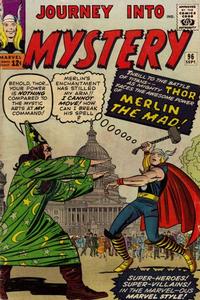 Defying the Magic of... Mad Merlin! (Table of Contents: 1)

This 'Merlin' was revealed to be an imposter in Avengers Annual #22. In most of his appearances he calls himself 'Maha Yogi'. He has been said to be a mutant, but this is also false.

The Traveler (Table of Contents: 2)

Job Number
[J-865]
First Line of Dialogue or Text
Bill Swift hated his set, daily routine.
Genre
science fiction
Characters
Bill Swift; Mr. Allen
Synopsis
A bored man working on an assembly line is taken to outer space in his dreams, and is given an idea for an otherworldly invention.
Reprints

Continues in next issue.

First Line of Dialogue or Text
You who are mortal, beware!
Genre
science fiction
Characters
John
Synopsis
The gorgons of myth were aliens and send an agent to modern Earth preceding an invasion. She cannot turn the first men she encounters to stone, but since she doesn't know that they're blind the invasion is cancelled.
Reprints

Job Number
X-386
First Line of Dialogue or Text
Frederick Fenton had one burning ambition--to visit the future!
Genre
science fiction
Characters
Frederick Fenton
Synopsis
An arrogant rich man builds a time machine in order gain the secret to eternal life from the future. When he arrives he finds that the Earth that humanity has gone to a paradise planet, and his time machine will not take him back.
Reprints
Keywords
time travel

This is a retelling of "The Man in the Iron Box" drawn by Carl Burgos in Strange Tales (Marvel, 1951 series) #69 (June 1959); the earlier story uses suspended animation to achieve the same effect. Job number from Tom Lammers and Ger Apeldoorn via the Atlas/Timely discussion group.