On-sale date is the publication date reported in U. S. Copyright Office filings. Includes 10 pages of paid advertisements and is the first issue to be published without text pages.
This issue has variants:

The Living Bomb! (Table of Contents)

Possible Kirby inks per Nick Caputo based on an examination at his blog: http://nick-caputo.blogspot.com/2011/09/kirby-inking-kirby.html. Previous indexer credited Dick Ayers. 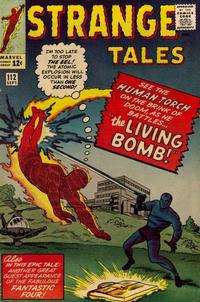 The Living Bomb! (Table of Contents: 1)

The Eel next appears in issue #117 (February 1964). The Eel, with his blueish-purple costume and oily-slick coating may have inspired the villain on the 1967 Spider-Man cartoon, "The Slippery Doctor Von Schlick". Charles Lawson, an atomic scientist, may have been related to Walter Lawson, an expert in guided missiles, who died in Marvel Super-Heroes (Marvel, 1967 series) #13 (March 1968). The plot about a miniature atomic pile which eventually explodes is similar to the Mike Hammer film, "Kiss Me Deadly" (1955).

Don't Miss Another Big One from Marvel! (Table of Contents: 2) (Expand) /

The Man Who Dared! (Table of Contents: 3)

Job Number
[X-367 ?]
Genre
horror-suspense
Characters
Karl King; Tibo
Synopsis
A gem merchant hears of the world's largest ruby guarded by a legendary giant statue in Tibet. He travels to Tibet and steals the ruby, but his escape is cut off by a boulder as he drives his jeep down the mountain pass and he is startled to see the giant statue is alive and pursuing him.
Reprints

I Saw the Impossible World! (Table of Contents: 5)

Job Number
X-368
Genre
science fiction
Characters
Tom Bronson
Synopsis
A deserter from the Space Corps of the future finds a replica of his home town and friends on an alien world. A stranger reveals that they are illusions created from the imagination of those who visit this planet and that they disappear. The man is horrified to find that he too is only a figment of the stranger's imagination.
Reprints