Distributed to newsstands in June 1963. This issue includes 9 pages of paid advertisements and is the first issue of Tales of Suspense without text pages.

The Icy Fingers of Jack Frost (Table of Contents)

First Line of Dialogue or Text
Once I seal you within my unbreakable cube of ice, even your strength will be...
Genre
superhero
Characters
Iron Man [Tony Stark]; Jack Frost [Gregor Shapanka]; Pepper Potts; Happy Hogan
Reprints 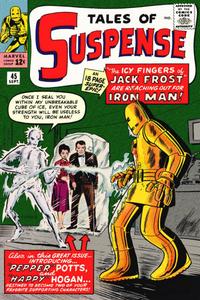 The Icy Fingers of Jack Frost! (Table of Contents: 1)

Happy Hogan is based on pro wrestler-turned-actor Nat Pendleton; Pepper Potts is based on actress Ann B. Davis. [per Henry Kujawa]

Another Big One from Marvel! (Table of Contents: 2) (Expand) /

The Avengers / promo (ad from the publisher) / 1 page (report information)

I Come From Far Centaurus! (Table of Contents: 4)

Job Number
X-366
First Line of Dialogue or Text
My home is on far Centaurus...
Genre
science fiction
Characters
Victor Farrington
Synopsis
A greedy man is delighted when an alien shows that he will be rich, but he is sentenced to exile for fraud, and imprisoned on an asteroid where his money is useless.
Reprints
Keywords
time sphere