First Appearance of X-Men and Magneto. Sol Brodsky inks per The Marvel Comics Index (Olshevsky 1981), The Official Marvel Index to the X-Men (Olshevsky 1987), and Official Index to the Marvel Universe (Vandal et al. 2009), Nick Caputo, Bob Ford, and this site’s original indexer.Frank Giacoia inks per Carl Gafford. Steve Whitaker originally credited Paul Reinman on inks, although Nick Caputo notes a comparison between Reinman's inking in the interior story and the slicker inking on the cover points to Brodsky's slicker style.

Sources for letters credit are The Marvel Comics Index, The Official Marvel Index to The X-Men, and Official Index to the Marvel Universe. 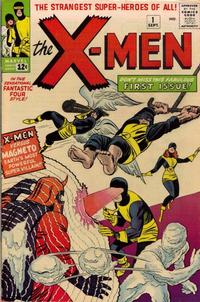