All Hail Rath! Lord of Atlantis! (Table of Contents) 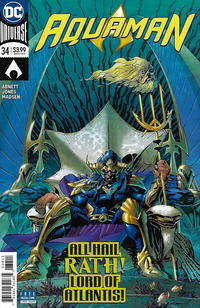 Genre
superhero
Characters
Corum Rath; Callun Rath (Corum Rath's father, flashback); unnamed Drift soldiers; Elder Leot; Urcell; unnamed Taint-Bloods (flashback); Murk; Aquaman [Arthur Curry; Orin] (in Corum Rath's vision); Kadaver; Magister Loke; unidentified members of the Silent School; unnamed god of the Abyssal Dark
Synopsis
Corum Rath recalls his youth growing up in the Ninth Tride and his desire to one day rule Atlantis. Rath is angry that the Crown of Thorns has come down leaving Atlantis vulnerable, and plans to tap the dark secret magic that the Silent School has locked away. When Magister Loke refuses access to this dark magic, Rath has Kadaver defeat Loke and Kadaver takes over as Magister. Rath then has Kadaver open the vault below the Silent School to access the magic of the Abyssal Dark.
Reprints
Keywords
Abyssal Dark

Aquaman is not part of this story, he only appears when Corum Rath has a vision of killing him.