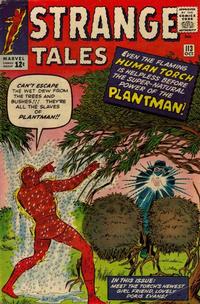 The Coming of the Plantman! (Table of Contents: 1)

Plantman's costume resembles that worn by The Shadow; he next appears, in a new costume, in issue #121 (June 1964). Doris Evans would continue as Johnny's semi-reluctant girlfriend until the end of his solo series.

Job Number
K-368
Genre
fantasy-supernatural
Characters
Herbert; Mr. Blooper
Synopsis
A man insists on getting a specially made pair of glasses in a hurry, and finds that the optician has a magical corridor that leads back in time.
Reprints

The Search for Shanng! (Table of Contents: 3)

Job Number
X-399
Genre
science fiction
Characters
Shanng
Synopsis
An alien crash lands on Earth, and offers knowledge to in exchange for help. Greedy humans cannot find his ship, since he sensed their selfish thoughts and hid himself until humanity is ready.
Reprints

Job Number
[X-400 ?]
Genre
horror-suspense
Characters
Uncle Hugo; Harry Hook
Synopsis
A shoemaker who enjoys telling the neighborhood children stories of the little people who come out at night to help him make shoes becomes ill and goes to a loan shark to acquire money for medical treatment. The loan shark harasses him constantly to make interest payments on his loan so he must work night and day. The last time the greedy money lender visits the shoemaker he gets the shock of his life as it turns out the little people are real. They shrink the man and put him to work building shoes for the shoemaker.
Reprints