Too Many Kooks! (Table of Contents)

Scooby-Doo; Angel and the Ape; Stanley and His Monster; The Inferior Five / cover / 1 page (report information) 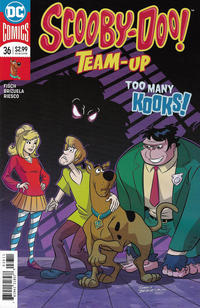 Too Many Kooks (Table of Contents: 1)

In addition to the featured guest-stars, Sugar & Spike (from their own series), The Maniaks (from Showcase #68, 69 & 71), and parodies of long-time DC stars Jerry Lewis ("Louie Jervis") and Bob Hope ("Rob Pope") make appearances.
The Maniaks are performing a song they sang in Showcase #68, a parody of "Take the Last Train to Clarksville" by the Monkees.
Other acts announced at the telethon but not seen include Lando, Man of Magic (from the earliest issues of World's Finest Comics) and Goody Rickels (a parody of insult comic Don Rickles from Superman's Pal, Jimmy Olsen #139 & 141).
Seen taking pledges are Windy Wiggs and Willy Newton (from Windy and Willy), Scooter (from Swing with Scooter), Binky Biggs (from Leave It to Binky), and Debbi Anderson (from A Date with Debbi).
Also, Stanley's Monster Spot mentions preferring The Flips, who appeared in the Teen Titans try-out in Showcase #59, to The Maniaks.
Mr. Nelson and Mr. Arnold are named for E. Nelson Bridwell, creator of Angel and the Ape, the Inferior Five, and the Maniaks; and Arnold Drake, creator of Stanley and His Monster and long-time writer of DC's Jerry Lewis and Bob Hope comics.
Another in-joke involves Sam Simeon and Merryman trading compliments, comparing their work as cartoonists to the artists primarily associated with Angel and the Ape (Bob Oksner) and The Inferior Five (Mike Sekowsky).

A Catty Conundrum (Table of Contents: 2)