The Amazing Thefts of the I.Q. Gang! (Table of Contents) 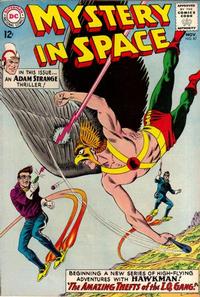 The Super-Brain of Adam Strange! (Table of Contents: 2)

Genre
adventure; science fiction
Characters
Adam Strange; Alanna; Sardath
Synopsis
Sardath attempts to control Adam's Zeta-Beam visits to Rann, but a side-effect gives Adam a super-evolved brain which also creates a brain-wave menace for the planet. When Alanna shuts down Sardath's machine, all returns to normal but some of the brain-wave energy becomes frozen into a rock which Adam takes back to Earth.
Reprints

References Mystery in Space #75 and 85. Continued in the next story in this issue, "Amazing Thefts of The I.Q. Gang!"

Amazing Thefts of the I.Q. Gang! (Table of Contents: 6)

Story in two parts of 6.67 pages each. Continued from previous story in this issue, "The Super-Brain of Adam Strange!" Adam Strange cameo noted by Bob Bailey.

The Brave and the Bold / promo (ad from the publisher) / 0.5 page (report information)