Which Way, My Heart? (Table of Contents) 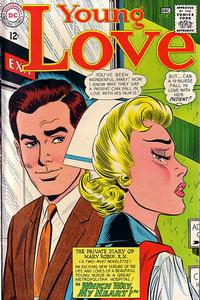 First Line of Dialogue or Text
You've been wonderful, Mary! Now, I know why they say a patient can fall in love with his nurse!
Genre
romance
Characters
Mary Robin; Dr. Will Ames; Vera; Greg Townsend
Synopsis
Mary is torn between the surgeon, who doesn't love her, and the patient who thinks he does.
Reprints
Keywords
kitten

Someone to Remember (Table of Contents: 4)

First Line of Dialogue or Text
Judy and I were in love -- forever, we said -- but forever ended with summer... for Judy, in a fall setting, was not my love at all! She was a goddess of summer... she was only...
Genre
romance
Characters
Judy; Gay; Ted
Synopsis
When Ted meets Judy during the summer, he thinks he will love her forever. But in the fall, he compares her with the other girls at her school and questions how he feels about her. She tries to change for him, but this only drives him away faster. He makes a date with Judy's roommate, but then realizes that none of the other girls he has met is as genuine as Judy.
Reprints
Keywords
cigarette

Credits for penciler and inker from Nadle's paybook. Possible that the script was bought by Phyllis Reed, the former romance editor. Scripter identified by Bob Hughes.

A Formal Look (Table of Contents: 5)

The Power of Love (Table of Contents: 7)

First Line of Dialogue or Text
Why did she have to come here, tonight. This was the happiest day of my life -- up to now!
Genre
romance
Characters
Judith Matthews; Chris; Linda Matthews; Bill Watson
Synopsis
The boys that meet Linda's sister can't resist her beauty and Linda comes to accept it. But when she meets Bill she hopes to avoid putting him to the test.
Reprints
Keywords
swimming; tennis

Nadle's payment books has Mike Sekowsky for this story, however a group of art spotters on the GCD agreeded that this was Arthur Peddy (April 2012). Previous indexer thought it was Don Heck.

First Line of Dialogue or Text
Hi! I've been asked to tell you that now is your big chance...