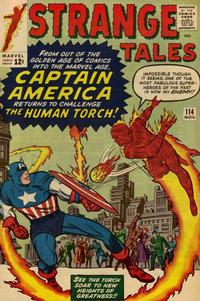 Acrobat last appears in issue #106 (March 1963). This story involving a Captain America imposter was a try-out to test the idea of reviving him. The real Cap would return only 4 months later in Avengers, The (Marvel, 1963 series) #4 (March 1964).

"Cap" wears red trunks in this story instead of the usual blue.

The Return of the Omnipotent Baron Mordo! (Table of Contents: 3)

Baron Mordo last appears in issue #111 (August 1963) and, not counting next issue's flashback, Mordo next appears in issue #117 (February 1964). Victoria Bentley next appears in issue #160 (September 1967). Inker is obviously George Roussos, though not credited on artwork. Stan Lee notes he was waiting for reader feedback after Strange's first appearances; this suggests Roussos may have inked this episode because of a very last-minute decision to begin running the series regularly.