Distributed to newstands in August 1963. This issue includes 10 pages of paid advertisements.

The Mysterious Melter! (Table of Contents)

First Line of Dialogue or Text
How can I fight a super-foe who has the power to melt my iron armor within seconds??!
Genre
superhero
Characters
Iron Man [Tony Stark]; the Melter [Bruno Horgan]
Reprints 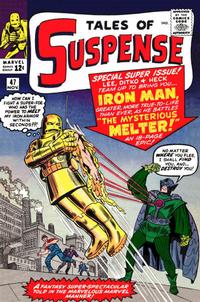 Job Number
X-448
First Line of Dialogue or Text
How can a man of iron save himself from a supervillain with the power to melt iron??
Genre
superhero
Characters
Iron Man [Tony Stark]; the Melter [Bruno Horgan] (introduction, origin); Pepper Potts; Happy Hogan
Synopsis
A former competitor of Tony Stark becomes the Melter and sabotages one of his plants. Iron Man tries to defend it but must flee before the Melter. He defeats him by constructing an aluminum suit that he cannot melt.
Reprints

Aluminum actually has a significantly lower melting point than iron.

The Green Man (Table of Contents: 2)

Job Number
[A-189]
First Line of Dialogue or Text
It was a hot sticky summer night when I stopped in to Barney's for a cool beer before I went home.
Genre
science fiction
Characters
Barney
Synopsis
A former pilot can't get anyone to believe his story about the fatal radium poisoning he picked up from an alien, and so keeps spreading it.
Reprints
Keywords
Typra (planet); XL-70 (plane)

First Line of Dialogue or Text
Once again we take you into the future for another gripping tale!
Genre
science fiction
Characters
Athena; Bimmus (extraterrestrials); Carl Collins
Synopsis
A radar operator turns off Earth's defenses when alien raiders offer him the most beautiful woman in the universe, but he finds out too late that she is only beautiful to them.
Reprints

This is a retelling of "The Coming of the Krills" by Stan Lee and Steve Ditko from Amazing Adult Fantasy (Marvel, 1961 series) #8 (January 1962). Letters credit from George Olshevsky's Marvel Comics Index.