New corner symbol of Giant-Man and the Wasp by Don Heck. 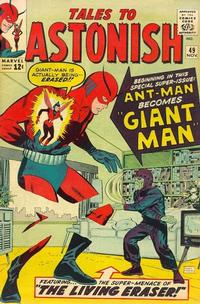 The Birth of Giant-Man! (Table of Contents: 1)

First Line of Dialogue or Text
An ear-splitting explosion rocks a quiet house on the...
Genre
superhero
Characters
Giant-Man [Henry Pym] (first appearance as Giant-Man); Wasp [Janet Van Dyne]; Living Eraser (introduction)
Synopsis
While Henry Pym develops capsules that permit him to become giant-size as well as ant-size, the Eraser captures him and brings him to Dimension Z along with other scientists to build atomic weapons. Giant-Man defeats their captors and rescues the scientists.
Reprints
Keywords
New Jersey

Job Number
[J-216]
First Line of Dialogue or Text
When a man who has been very competent suddenly becomes slipshod, there's usually a reason.
Genre
science fiction
Characters
Jim Branner; Bill Toney
Synopsis
The manager of an auto parts shop develops a sudden tolerance for "human variation" in parts, possibly linked to otherworldly strangers in the shop at night.
Reprints

First Line of Dialogue or Text
In a far-distant galaxy, whose very existence is unknown to us, there sits...
Genre
science fiction
Characters
Zarku
Synopsis
A ruler orders the destruction of an uninhabited galaxy as a tribute to his power. The explosion in the microscopic universe is witnessed through a microscope by a boy as an unimportant anomaly.
Reprints
Keywords
delta anti-matter