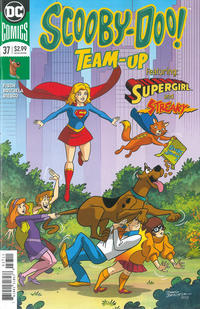 Genre
superhero
Characters
Scooby-Doo; Supergirl [Linda Lee Danvers]; Fred; Daphne; Velma; Shaggy; Edna Danvers; Fred Danvers; Streaky; Nasthalthia Luthor
Synopsis
Supergirl enlists the Scooby gang when she and her adoptive parents seem to be haunted by ghosts from Argo City, including her birth parents Alura and Zor-El. The ghosts turn out to be part of a plot by Nasthalthia to expose Supergirl's secret identity, but of course she fails.
Reprints
Keywords
Argo City; Krypton; X-Kryptonite

Scooby-Doo gains temporary super-powers when he is exposed to Streaky's X-Kryptonite.

Jennifer Liang, DC's Assistant Art Director, is also credited for this sequence.
Illustrations are taken from the cover and interior of Superman (DC, 1939 series) #199 (first race between Superman and the Flash).