The Uncanny Sandman! (Table of Contents) 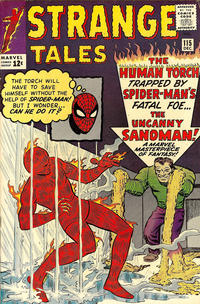 The Sandman Strikes! (Table of Contents: 1)

Zero of Time (Table of Contents: 3)

Job Number
[9689]
Genre
science fiction
Characters
John Pearson; Prof. Thomas Benton; Father Time
Synopsis
A scientist's machine transports him and a reporter outside of time and into the realm of Father Time.
Reprints

The Origin of Dr. Strange (Table of Contents: 4)

This is the first mention of Dormammu. The Ancient One's home is said here to be in India, this is later changed to Tibet.

Stan Lee says they forgot to tell Strange's origin before this. Judging by the evolution of the artwork, it appears this was at least the ninth episode drawn! In all other episodes up to issue #120 (May 1964), Strange resembes Vincent Price; in this and later ones, he resembles Ronald Colman. Certain plot elements are somewhat similar to those in the Frank Capra film, Lost Horizon (1937).