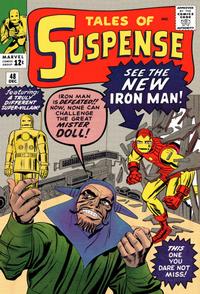 Mister Doll was originally named Mister Pain, a change noticeable in the lettering and confirmed in Essential Iron Man (Marvel, 2000 series) #1. It was presumably changed to meet the restrictions of the Comics Code. (Note added by Haydn via the GCD Error Tracker.)

The Pact (Table of Contents: 2)

Job Number
[9734]
First Line of Dialogue or Text
The tall, young man sat at his desk and stared steadily at the sheet of paper in his typewriter.
Genre
horror-suspense
Characters
Henry Conrad; Frances Conrad; the Devil [Uninvited Guest]; Branders Conrad
Synopsis
A historian writing about the trial and execution of his ancestor for witchcraft interviews the only remaining party concerned in the case: the Devil.
Reprints

First Line of Dialogue or Text
It has been written that no man can escape his fate!
Genre
science fiction
Characters
Hans Hartog; Kraddak
Synopsis
An alien tells a greedy mine owner that he will be killed in a fall. The mine owner hides at the lowest possible point in his mine, but is killed in a cave-in.
Reprints