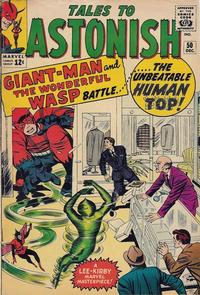 The Human Top! (Table of Contents: 1)

First Line of Dialogue or Text
Let's face it!
Genre
superhero
Characters
Giant-Man [Henry Pym]; Wasp [Janet Van Dyne]; Human Top [Dave Cannon] (introduction, origin)
Synopsis
Henry Pym follows the crime spree of the Human Top in the newspapers but the Wasp convinces Henry to go after him as Giant-Man. The Top evades Giant-Man, and he must train to out-maneuver him.
Reprints

Continues in next issue. Per Nick Caputo, Don Heck provided alterations on the Wasp's face in many panels. Bob Bailey originally credited Don Heck or Sol Brodsky with uncredited inking on the entire story.

Job Number
[K-266]
First Line of Dialogue or Text
There was much excitement in the Pidgeon household the week that Uncle Pete was...
Genre
science fiction
Characters
Tommy Pidgeon; Goober Jones; Rosie; Uncle Pete
Synopsis
Tommy's uncle returns from a space journey needing to re-learn how to walk on Earth instead of floating.
Reprints

The Secret of Sagattus! (Table of Contents: 3)

Job Number
X-481
First Line of Dialogue or Text
Everyone knew there was a bond between the king and the hunchback...
Genre
fantasy-supernatural
Characters
Quoquo; John
Synopsis
A wise king listens only to the advice of a hunchback, causing the jealous nobles to murder the hunchback. They discover that the hunchback was the real ruler, and the king is only a manniquin.
Reprints

First Line of Dialogue or Text
Run! Run! Run or die!
Genre
horror-suspense
Characters
Rodrigo Cadiz
Synopsis
A dictator is tormented by dreams of running on a treadmill suspended high in the sky.
Reprints