On sale date from the publication date as submitted to the U.S. Copyright Office found in the Catalog of Copyright Entries, Part 2, Periodicals, 1941, New Series, Volume 36, Number 3. Class B periodical. Copyright registration number B 519606. 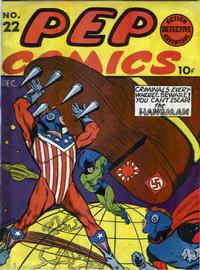 This is most probably Lucey, when comparing with his signed stories in #25 and #29. Notice long rounded chins.

[A Little Detour to France] (Table of Contents: 7)

[The Breakup of the Sky Pirates] (Table of Contents: 8)

First Line of Dialogue or Text
Hoot mon!
Genre
aviation; war
Characters
Nazis; Price; Jolly Roger; Frank Root; Marty Martin
Synopsis
Orders come down reassigning each Sky Pirate to a different squadron. During an intense dogfight, the Sky Pirates break formation from their squadrons to fly together and they manage to thwart the Nazis from bombing London; afterward, the Sky Pirates are officially commissioned by the R.A.F. as the Jolly Roger Squadron.
Keywords
dogfight

First Line of Dialogue or Text
Just a matter of skill, that's all!
Genre
humor; teen
Characters
Archie Andrews [Archibald Andrews; Chick]; Betty Cooper; Sam Cooper; Mildred Cooper; Fred Andrews; Edna Andrews; Gramps Andrews; Jughead Jones [Forsythe P. Jones] (introduction for all)
Synopsis
Archie meets Betty, a girl who has just moved into the neighborhood. He shows off for her, claiming he can do anything. At a carnival that weekend, Betty meets a man who needs a tight rope walker. Betty, remembering that Archie can do anything, volunteers Archie with humorous results.
Reprints
Keywords
circus; taffy

Only Fred Andrews is identified by name in this story. The other parents' names would change over the years.
Archie and Betty are a few years younger than usual.

Archie and his parents first appeared as a promotional advertisement cameo in Top Notch Comics (Archie, 1940 series) #22 released 5 days prior per Catalog of Copyright Entries.

Most probably Seymour, when comparing with his signed stories in #24 to 26.