The on-sale date is the publication date reported in the U. S. Copyright Office filing. On-sale date of "about Oct. 25" given in previous issue. 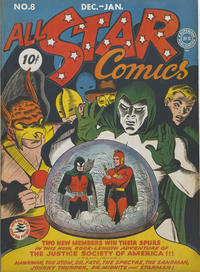 The splash page is the same exact piece that appeared in All-Star #7 as the promo for this issue except for Dr. Fate's helmet.

Genre
superhero
Characters
Dr. Mid-Nite [Dr. Charles McNider]; Myra Mason; Hooty (an owl); John McGraw (former Commissioner of Roads); Professor Able's caretaker; Professor Elba's lawyer (villain); unnamed city political boss (villain)
Synopsis
Dr. McNider hears on the radio that a former city official has escaped from a mental institution and has a fear of light. Dr. Mid-Nite captures the official, binds him and takes a blood sample, indicating a rare blood disease found in apes! He goes to see a Professor Able, who has discovered a cure for the disease, and also finds a vial of the antidote. He brings the city official back to sanity, but then runs across two criminals in the employ of a Dr. Elba. Capturing both, the Man of Night is suddenly struck from behind by Dr. Elba and would have been shot to death had not Hooty intervened.
Reprints
Keywords
Blackout Bomb; Solution K

Genre
superhero
Characters
Justice Society of America [Dr. Mid-Nite [Dr. Charles McNider]; The Spectre [Jim Corrigan]; The Starman [Ted Knight]; Dr. Fate [Kent Nelson]; Johnny Thunder; Hawkman [Carter Hall]; The Sandman [Wesley Dodds]; The Atom [Al Pratt]]; Hooty (an owl)
Synopsis
His story ended, Dr. Mid-Nite now provides each member a hypo full of the antidote, called Solution K, to use on the witnesses that had been driven insane. Then the JSA could possibly get a clue from them as to where to find Dr. Elba.
Reprints
Keywords
Solution K

Genre
superhero
Characters
Dr. Fate [Kent Nelson]; Inza Cramer; Bill Ford [aka Bill Benson] (bus franchise owner); Marge Benson (Bill's wife); unnamed bus driver; Goopy Gus Gluck (villain); Gluck's gang (villains)
Synopsis
Dr. Fate visits Inza, who is watching over a friend, Bill Ford, who was driven insane. Ford tells Fate that Goopy Gus Gluck was behind a city bus fraud ring and that he has kidnapped his wife, Marge. Fate disguises himself as a bus driver, and when he is attacked, he rounds up the ring and forces Goopy to sign a confession before heading out to look for Dr. Elba.
Reprints
Keywords
Solution K

Genre
superhero
Characters
The Atom [Al Pratt] (part-time jewelry store clerk); Mr. Corson (jewelry store owner); Hartford Dormley (villain, attorney); Brent (villain); Butch (villain)
Synopsis
Al Pratt, working at a jewelry store, is visited by a man who tries to sell a jewel worth a fortune, but is arrested for selling a stolen gem. Later, an "attorney" threatens to sue to for false arrest, but will agree to a $1000 settlement out of court. Al smells a rat, follows the lawyer back to his office and confronts the two. A fight ensues, Brent is driven insane by a drug-laden wooden sliver, then Atom gives the man the antidote. Atom rounds up the rest of the gang, then discovers a note to the gang to see Dr. Elba for more insanity serum, and sets out to track down the evil doctor.
Reprints
Keywords
Solution K

Genre
superhero
Characters
The Sandman [Wesley Dodds]; Dian Belmont; District Attorney Belmont; Senator Kenneth Spring (mention only); unnamed photographer (villain); O'Hooliny (villain); two thugs (villains)
Synopsis
Armed with Solution K, Sandman injects his two witnesses with it, and they tell him of a racket they are involved in. It seems that they go to conventions and take compromising pictures of gentlemen there, then sells them back to those men at ridiculously high prices. Sandman then tracks down the other people involved in the scheme and turns them over to the Police.
Reprints
Keywords
Solution K; Wirepoon

Genre
superhero
Characters
The Starman [Ted Knight]; Doris Lee; Billy (young boy); B. Jamison Baker (baker, socialite, publisher); Whitey (villain); "Alabama" (villain); un-named gang members (villains)
Synopsis
Billy discovers a trunk of money in an abandoned house, and hurries to tell his father when he runs in front of Ted Knight's car. The lad is saved and tells Knight and Doris about the trunk. Starman takes the boy back to the house just as several criminals are peering into the trunk's contents. He plows into them and all escape but one who is injected with the insanity serum. After injecting the antidote to the thug, Starman learns that his gang was forging phony letters to hurt the chances of a person running for Governor. Starman then captures the gang and heads out to find Dr. Elba.
Reprints
Keywords
Gravity Rod; Solution K

Genre
superhero
Characters
Hawkman [Carter Hall]; Hawkgirl [Shiera Sanders]; Big Red (a hawk); Preston Nevel (banker); Hunt (villain, death); Watkins (villain, death)
Synopsis
Hawkman arrives to the location of his insane witness and injects him with Solution K. The man relates that he is a part of a gang which studies newspaper clippings in order to dig up some dirt on people with money that they could blackmail. During the initial confrontation with the gang, Hawkgirl is stunned by radio-controlled lightning. Hawkman rescues her just in time, being aided by his hawks, then he takes care of the two blackmailers.
Reprints
Keywords
Hawk Valley; Mountain Lake Lodge; Solution K

Genre
superhero
Characters
The Spectre [Jim Corrigan]; unnamed prison Warden; Louis Scaloni (villain); "Boss" Williams (villain); William's butler (villain); William's gang (villains)
Synopsis
The Ghostly Guardian visits the State hospital to inject his witness, Louis Scaloni, only to discover that the man is missing. Reverting to his Jim Corrigan identity, he visits gang "Boss" Williams to discover Scaloni's whereabouts, and is knocked out. When he recovers, he is shown Scaloni in the basement, now totally insane, so that he couldn't go to the cops about Boss Williams. Spectre then injects Scaloni with Solution K and rounds up the entire gang of Boss Williams.
Reprints
Keywords
Solution K

Genre
aviation
Characters
Hop Harrigan; Tank Tinker [aka The Super Duper Man]; Superman [Clark Kent]; Batman [Bruce Wayne]; Green Lantern [Alan Scott]; The Flash [Jay Garrick]; Dr. Mid-Nite [Dr. Charles McNider]; Hawkman [Carter Hall]; Tanner
Synopsis
Hop decides to attend an air stunt show, put on by a guy billing himself as The Super Duper Man, who could out-do any JSA member living! The plane goes into a dive and can't pull up, and Superman saves the plane and pilot, Tank Tinker! Hop agrees to test the plane himself with Tank, who bails out at 5,000 feet, saved by the Flash! Tank goes up again, bailing out at 2000 feet with wings attached to his back. A wing loosened but he was saved by Hawkman, and together they glided down for a safely. Upon reaching the reviewing stand, Tank was awarded the prize of $50,000 for completing the stunts.
Reprints
Keywords
The Sprite

The other JSA members are alluded to.

Genre
humor; superhero
Characters
Johnny Thunder; The Thunderbolt [Archibald]; Daisy Darling (cameo); Herman Darling (cameo); Oscar K. Doodle (contractor); Doodle's butler (villain); a thug (villain); Professor Elba (villain)
Synopsis
Hypo in hand, Johnny heads out for the house where an insane man was left, telling the Thunderbolt to butt out of this case. Unfortunately for Johnny, when he arrives at the house, he is confronted by a pair of thugs, who beat him up and throw him in with the crazed man. Fortunately, the T-Bolt shows up with the Solution K, and it's successfully injected. Johnny discovers the man was not a crook, but someone who was about to turn in the crooks to the D.A. for selling colored sand as cement to construction companies. The crooks are rounded up, but Dr. Elba shows up and knocks out brother John.
Reprints
Keywords
Solution K

Genre
superhero
Characters
Justice Society of America [Johnny Thunder; Hawkman [Carter Hall]; The Spectre [Jim Corrigan]; The Starman [Ted Knight]; The Atom [Al Pratt]; The Sandman [Wesley Dodds]; Dr. Fate [Kent Nelson]; Dr. Mid-Nite [Dr. Charles McNider]]; The Thunderbolt [Archibald]; Hooty (an owl); Dr. Elba (villain, death)
Synopsis
As Dr. Elba is about to inject Johnny with the insanity serum, the Thunderbolt arrives with the JSA members. As the JSA approaches Elba, the lights go out and Elba disappears. Dr. Mid-Nite approaches a man in the shadows, believing him to be the missing Professor Able, and, as that man beckons the Man of Night closer, he suddenly tells him that he is BOTH Able and Elba, and attempts to jab Mid-Nite with a hypo of insanity serum. However, Elba injects himself accidentally, and falls out a window to his death.
Reprints

Hooty is made the official mascot of the JSA.

Genre
superhero
Characters
Wonder Woman [Princess Diana] (introduction, origin); Mala (introduction); Queen Hippolyta [as Hippolyte] (introduction, Diana's mother, Queen of the Amazons); unnamed doctor; Captain Steve Trevor (introduction); Athena (goddess of wisdom); Aphrodite (goddess); Diana (goddess of the Moon, mention only); Hercules (flashback); Fritz (villain); von Storm (villain)
Synopsis
Captain Steve Trevor crashes on Paradise Island and is nursed back to health, and has to be returned to the U.S. Queen Hippolyte's daughter has fallen in love with him, so the Queen tells her Diana the story of the Amazons and how she must not leave the island, lest she lose her eternal life. She uses the Magic Sphere to show how Trevor crashed on Paradise Island, but refuses to allow Diana to return the Captain to the U.S., so she holds a contest to select the suitable Amazon to do the chore. Diana, in disguise, wins the contest, and is allowed the return the Captain home.
Reprints

The illustration of Wonder Woman on the splash page was used on the cover of Sensation Comics #1.