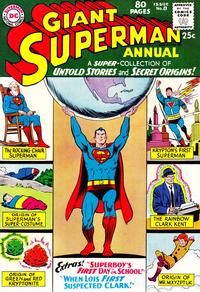 When Lois First Suspected Clark Was Superman! (Table of Contents: 2)

Genre
superhero
Characters
Clark Kent; Lana Lang; Jonathan Kent; Martha Kent
Synopsis
Clark's first day of school is punctuated by a number of minor super feats, in later years Lana can recall one of the incidents but cannot remember which boy it had been.
Reprints

Genre
superhero
Characters
Superman; Lois Lane; Perry White; Jimmy Olsen; Robin the Boy Wonder; Superman Jr
Synopsis
Lois's impulsive nature causes a rocket with her on board to be prematurely launched into space. To teach her a lesson, Superman contrives to make her think that she has arrived back on Earth 50 years in the future, however, it is Superman's turn to be taken aback when Superman Jr. comes along.
Reprints

Members of the Legion of Super-Heroes (Table of Contents: 6)

Genre
superhero
Synopsis
List of the Legion of Super-Heroes members.

Genre
superhero
Characters
Superboy [Clark Kent]; Jonathan Kent; Martha Kent; Lana Lang; Mxyzptlk; Jor-El (Phantom); Fuzastl; Tlndsa
Synopsis
Mxyzptlk arrives on Earth for the 1st time but is outsmarted by Superboy and sent back to his own dimension. He then vows to make the Boy of Steel's life a super misery.
Reprints

Original title: "The Ghost of Jor-El." Titled "Mr. Mxyzptlk's First Prank" in the table of contents.

The Untold Story of Red Kryptonite! (Table of Contents: 8)

Prisoner of the Super-Heroes! (Table of Contents: 9)

Second appearance of the Legion of Super-Heroes.

Genre
superhero
Characters
Superman [Clark Kent]; Lois Lane; Jimmy Olsen; Perry White
Synopsis
When Superman repairs Lois's make-up mirror, he becomes super-sensitized and develops a rainbow aura whenever she opens the case. He must then use his super-wits to prevent her from opening the locket.
Reprints

The Origin of Superman's Super-Costume! (Table of Contents: 11)

Genre
superhero
Characters
Clark Kent [Superboy]; Jonathan Kent; Martha Kent
Synopsis
Whilst toddler Clark is invulnerable, his clothes are not. By unravelling the blankets that he was wrapped in during his journey from Krypton to Earth, the Kents are able to create an indestructable suit.
Reprints

Genre
superhero
Characters
Superman; Jimmy Olsen; Jor-El; Lara; Kil-Lor
Synopsis
Jimmy uses a magic totem to send Superman back to Krypton to see his parents once again. Fate intervenes and the Man of Steel helps to engineer his own parent's betrothal!
Reprints

Originally part 3 of the novel "The Three Magic Wishes".

For Holiday Giving and Holiday Getting! (Table of Contents: 13) (Expand) /

Great covers of the Past! Look for These Cover Stories in Future Giant Annuals! (Table of Contents: 14)