No Tomorrow for My Heart! (Table of Contents) 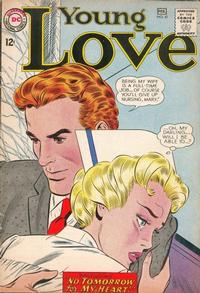 End with a Kiss (Table of Contents: 2)

First Line of Dialogue or Text
There are many ways to start a romance and just as many ways to end. One of my romances started with a kiss and, at that time I never dreamed I would also...
Genre
romance
Characters
Steve; Ann; Joan; Neil
Synopsis
Ann and Steve were attracted to each other the moment they laid eyes upon each other. Then one night, Steve breaks an appointment with her and she decides to visit her friend. Joan isn't at home, but she spend the night getting to know Joan's brother and enjoys meeting him. She sees him again a few nights later when Steve breaks another date with her and he asks her if she is going to marry Steve.
Reprints
Keywords
bowling

Bernard Sachs is the only name in Nadle's files for this story, but it's unclear if the credit is for both pencils and inks or for just inks. Sachs has his name sneaked on the record album on page 5. Writer credit from Bob Hughes.

First Line of Dialogue or Text
That one searing memory left its scar on my heart... and I vowed never to be hurt by love again! But then... relentlessly...
Genre
romance
Characters
Jeff Miller; Peter; Alice
Synopsis
Despite her parents' advice, Alice wants to marry Peter sooner rather than wait. When Peter tells her he doesn't love her the day before their wedding, she resolves never to make that mistake again. Then she falls in love with a sailor. Just before he ships out, he tells her he loves her and wants to take her with him, but she wants to wait to be sure of their love.
Reprints
Keywords
sailor

Pike is the name in Nadle's records.

No Tomorrow for My Heart! (Table of Contents: 7)

First Line of Dialogue or Text
Of course you'll give up nursing, Mary! Being my wife... is a full-time job!
Genre
romance
Characters
Ray Austin; Mary Robin; Tess Adams; Dr. Will Ames; Vera
Synopsis
When Mary saves a patient's life, he falls in love with her and asks her to marry him. But he expects her to resign as a nurse so she can be a full-time wife.
Reprints
Keywords
doctor; hospital; nurse