The Human Torch Battles the Thing! (Table of Contents) 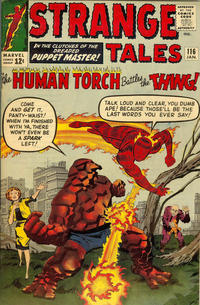 The Human Torch in the Clutches of the Puppet Master! (Table of Contents: 1)

The Radio (Table of Contents: 2)

Return to the Nightmare World! (Table of Contents: 3)

Job Number
X-517
Genre
superhero
Characters
Nightmare; Doctor Strange [Stephen Strange]; Ancient One [Yao] (cameo); Wong (unnamed); Dr. Warren
Synopsis
Nightmare has discovered the ability to capture humans and bring them to his world for study while they sleep. The police ask Strange's help, as a "last resort," to discover the cause behind a rash of people unable to awaken. Strange tracks the cause down to the Nightmare World, and has a rematch with his old foe.
Reprints