Beware of the Blob! (Table of Contents) 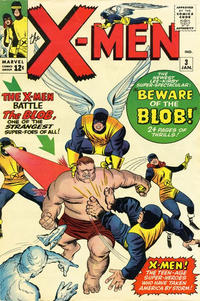 Beware of the Blob! (Table of Contents: 1)

First Line of Dialogue or Text
You have never seen a super-villain like the Blob!!
Genre
superhero
Characters
The X-Men [Professor X [Charles Xavier]; The Angel [Warren Worthington III]; The Beast [Hank McCoy]; Cyclops [Scott Summers]; Marvel Girl [Jean Grey]; Iceman [Bobby Drake]]; The Blob (introduction)
Synopsis
Professor X detects a new mutant and sends the X-Men to investigate. They arrive at a carnival and encounter the Blob, a very fat sideshow attraction who can bounce bullets off of his malleable hide as well as anchor himself to the earth and become immovable. The X-Men bring him back to the mansion as a potential member but the Blob spurns their invitation and returns to the carnival. Realizing that the Blob knows their secret, the X-Men lure him back to the mansion where Xavier wipes his memory.
Reprints