The Menace of Dream Girl! (Table of Contents) 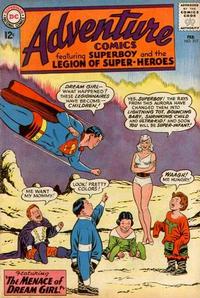 Part I The Menace of Dream Girl! (Table of Contents: 2)

First mention of the Time Trapper and the first appearance the Iron Curtain of Time.

At the beginning of the meeting, there is a reading of the Legion Constitution, which includes "Clause 6, sub-clause 3 [which] requires that every Legionnaire use language-learning machines to learn any new planetary language."

First Line of Dialogue or Text
Look at that turtle dressed like Superman...
Genre
humor; anthropomorphic-funny animals; superhero
Characters
Super-Turtle
Synopsis
Super-Turtle confronts bank robbers who laugh at a turtle dressed like Superman. They shoot at him, but keep missing. Super-Turtle is discouraged that crooks will never realize he is invincible unless they can hit him, so the next time he encounters bank robbers, he puts a bullseye on his belly.

Statement of Ownership, Management and Circulation (Table of Contents: 4)

First Line of Dialogue or Text
He's lying on a bed of spikes!
Genre
humor
Characters
Moolah the Mystic
Synopsis
Moolah, who lies on nails and eats fire, stays away from the beach because he gets a sunburn.
Reprints

Part II The Doom of the Legion! (Table of Contents: 7)

Again Dream Girl quotes from the Legion Constitution: clause 33-B says "If a Legionnaire becomes physically or mentally unfit to perform his duties, he must remain under observation in the Science Hospital for one year." And later she mentions that clause 81 allows punishment for making false charges against a fellow-Legionnaire.

The column starts with an announcement of the new "Hall of Fame" department, which reprints from time to time the "greatest stories of past eras."

The editor also credits Edmond Hamilton for "The Super-Villains of all Ages" in issue 314, and for the story in the next issue, 318.

The Shrinking of Superboy! (Table of Contents: 10)

Caption in splash panel has been rewritten to reference the "Hall of Fame" reprints that begin in this issue. The original story title does not end with an exclamation point.

Fight Global Air Battles with Planes of All Nations (Table of Contents: 11) (Expand) /