Trouble at the Ten-Year Club! (Table of Contents) 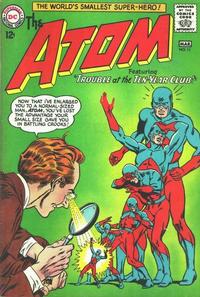 Trouble at the Ten-Year Club! (Table of Contents: 2)

Special Christmas Quiz "Christmas in Many Lands" (Table of Contents: 6)

Dash Out of Your Foxholes! (Table of Contents: 7) (Expand) /

Voyage to Beyond! (Table of Contents: 12)

Genre
superhero
Characters
The Atom [Ray Palmer]; Jean Loring; Kathis (villain); Anton (villain); Santh (villain)
Synopsis
Ray Palmer is aboard an ocean cruise with Jean Loring when she and all the other passengers vanish, only to be replaced by duplicates from the other-dimensional world of Randath.
Reprints

The Randathians claim to have been behind the disappearance of the passengers of two famous ships, the Mary Celeste (1872) and the Joyita (1955).